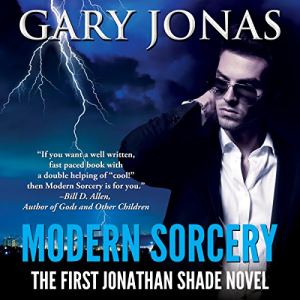 A husband armed with a sword hacks apart his wife in a Denver grocery store. There are dozens of witnesses, and the crime is captured on the security cameras. To the police, it's an open-and-shut case.

To Naomi, the daughter of the couple, it's evidence of dark magic. She hires her ex-lover, a private investigator named Jonathan Shade to prove her father is innocent.

Shade specializes in paranormal cases, but he isn't buying it. Still, he takes the case, hoping to rekindle their relationship. Instead, Shade finds himself mixed up in supernatural intrigue with wizards, magically engineered assassins, and an ancient sorcerer returned to life who's willing to kill anyone who stands in his way.

Too bad Shade doesn't have any magic.