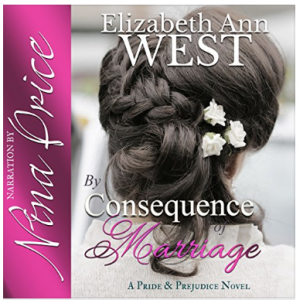 By Consequence of Marriage

This is the first novel in the Moralities of Marriage series.

When his horse throws a shoe, Fitzwilliam Darcy misses rescuing his sister, Georgiana Darcy, from the clutches of George Wickham by only one day. Now on the hunt to find them both, the gossip beginning to swirl in London forces him to abdicate the search to his cousin, Colonel Richard Fitzwilliam, while he plays the wayward gentleman in Hertfordshire with his friend Charles Bingley. After a collision with his future, Darcy struggles to satisfy his attraction to a pair of fine eyes and keep his family's scandal hidden.

Elizabeth Bennet dreams of nothing more than remaining close to her sister, Jane. When the rich gentleman, Charles Bingley, enters the neighborhood, it seems certain that Jane will make a match with him. After all, Jane Bennet is the sweetest and most beautiful woman in the county. But Elizabeth's efforts to find her own local match go awry and she feels abandoned by the first man to cause stirrings in her heart. Her parents attempt to marry Elizabeth off to her cousin, William Collins, who is set to inherit the estate. But when she refuses, she soon finds herself In London with relatives, forced to find her own happiness.

By Consequence of Marriage is a dramatic, historical romance novel starring our favorite dear couple from Jane Austen's Pride and Prejudice, wondering how the story might have changed if Georgiana was lost.