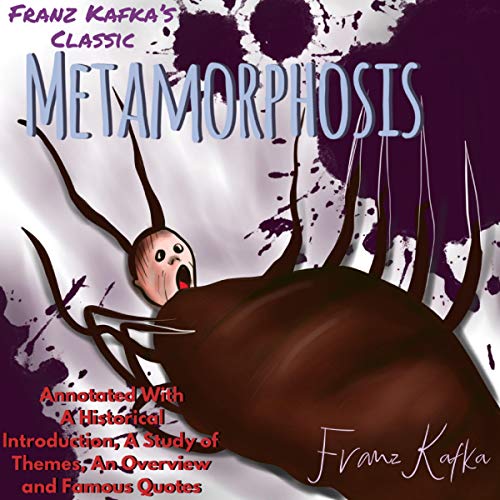 Metamorphosis (Annotated): With a Historical Introduction

Unique to this title are:

A historical introduction
An overview of Metamorphosis
A study of the themes present in Metamorphosis
A list of famous quotes from Metamorphosis
You may of course skip all of it and go straight to the main title if you do not want any spoilers and come back later to the beginning.

Franz Kafka was born in1883, the first of six children of a middle-class Ashkenazi Jewish family. He was born in Prague, the capital of the Kingdom of Bohemia, then part of the Austro-Hungarian Empire and today the capital of the Czech Republic. He trained to be a lawyer, and while he worked in an insurance company, he was only able to write part-time.

In Metamorphosis, Gregor Samsa, a traveling salesman, wakes up in his bed one morning and realizes that he has turned into a large insect. He doesn't understand how this is possible and decides to go back to sleep and forget about what has happened. When he tries to roll over in bed, he realizes that because his body is now the shape of an insect, he can't do this. He realizes he has many new legs and feels disgusted with himself. He wonders how he is going to continue working as a traveling salesman if he looks like this.