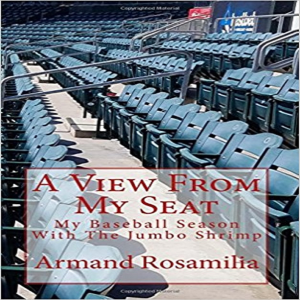 He grew up in a baseball family. He loves watching it. Studying it. Getting lost in it.

When his wife mentioned getting season tickets for the Jacksonville Jumbo Shrimp, the Double-A affiliate of the Miami Marlins, he jumped on it.

And a nonfiction book idea was born. His love of baseball and a season of minor league baseball.

He not only breaks down the entire 2017 Jumbo Shrimp season but gives his own perspective as a fan and tells stories from his own past as a baseball fan...going to the infamous Pine Tar game...being a diehard Red Sox fan...the 1993 World Series...Brooks Robinson's final game...collecting baseball cards, and so much more!