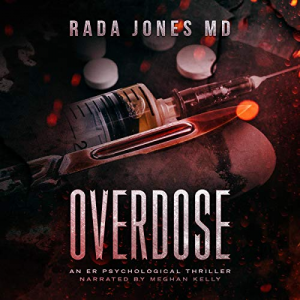 Dr. Emma Steele is baffled when she finds herself dressed in mental health blues, tied to a stretcher, in her own ER.

She was hunting for a killer. She found him.

Just as he found her.

He planted evidence accusing her of his crimes.

She’s innocent, so she’ll be free soon. She has friends who’ll help.

Things can’t get any worse.

Her challenges: A community decimated by the raging opioid epidemic. A charming psychopath dealing in drugs and sex. A daughter who hates her. An ex who doesn’t. Blood, guts, and death. Betrayal. And wine.

A captivating audiobook for medical junkies. Growing suspense, breathless twists and turns, crisp dialogue, unforgettable characters, and dark ER humor. A cocktail of medicine and suspense in the vein of Gerritsen, Cornwell, and Cook.

You’ll love Overdose if you crave ER drama with split seconds separating life from death. You’ll love it if blood, drugs, and dislocated joints give you the warm fuzzies. You’ll love it if you long to see what’s inside the mind of a serial killer. Overdose: a novel with strong, flawed characters entangled in complicated relationships, life and death fights, and wine. Mostly red.