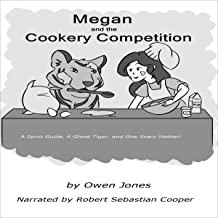 Megan and the Cookery Competition: A Spirit Guide, a Ghost Tiger and One Scary Mother!: Megan Series, Volume 18

Megan is a 13-year-old teenage girl, who realizes that she has psychic powers that others do not have. At first, she tried to talk to her mother about them, but with disastrous consequences, so she learned to keep quiet about them.
However, some people do offer to help and an animal showed a special friendship, but they were not "alive" in the normal sense of the word. They had passed on. Megan has three such friends: Wacinhinsha, her Spirit Guide, who had been Sioux in his last life on Earth; her maternal grandfather, Gramps; and a huge Siberian tiger called Grrr. Wacinhinsha is extremely knowledgeable in all things spiritual, psychic, and paranormal; her grandfather is a novice "dead person", and Grrr can only speak Tiger, as one might imagine and most of that, of course, is unintelligible to humans.
In this novella, Megan's mother starts to teach her to cook and they both enter a Women's Institute cookery competition in the Local Town Hall. Megan's specialty is Welsh bread and Suzanne's is the Victoria Jam Sandwich cake.