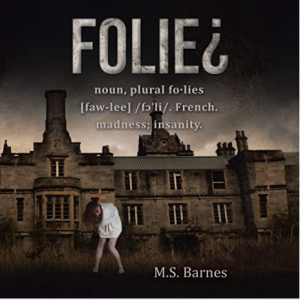 When Dr. Jane Lee, a recent graduate, takes her very first position as a psychiatrist at Southern States Mental Institute in Memphis, Tennessee, she gets more than she had bargained for. The idyllic images she had created in her mind while in school of treating the mentally ill clash immediately and drastically with the reality of the practice in real life. From the filthy, creepy, neglected facility in which she now works and the attitude of those in the mental health industry itself to the haunting madness of her first-ever patient, Matilda Rose, nothing is as she had imagined it would be.

As the story unfolds, Dr. Lee finds Matilda's psychosis, based around an ancient Chinese legend, to be far more chilling than anything she had encountered in training. And worse, it seems to be spreading to others - a situation described in the psychiatric journals as folie, or mass hysteria.

Will Dr. Lee be able to resist the pull of her patient's overwhelming psychosis and find a way to save her? Or will the good doctor fall prey herself and join the ranks of those who have already been drawn into the eerie and unsettling world of Matilda Rose?