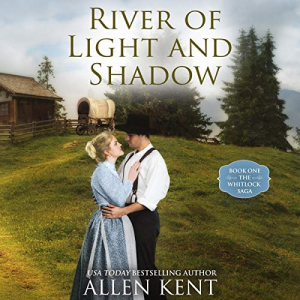 River of Light and Shadow: The Whitlock Trilogy, book 1

During Missouri’s Mormon Wars of the mid-1800s, the Whitlock family seeks to escape mob violence on the state’s western frontier by hiding in the rugged north Missouri wilderness where the Hill Spring Trail crosses the Chariton River. Here, in constant fear of discovery, David Whitlock meets and falls in love with Suzanna Shattuck, the independent and spirited daughter of a nearby settler.

Drawn together by love, divided by different worlds

As David and Suzanna struggle with their growing passion for each other and with the differences that separate their families, two other figures move inescapably toward each other and the young couple. In Jefferson City, legislator Jacob Randall champions the cause of Missouri's outcasts while Sheck Rogers, a self-appointed Mormon hunter, roams the state murdering and mutilating those he suspects of belonging to a church against which the Governor has issued an extermination order.

In this entrancing historical novel of love, fear, courage and redemption, two young lovers seek to find themselves and each other in Missouri’s untamed wilderness.

Their families struggle to survive the politics and passions of one of the nation’s most tumultuous periods. River of Light and Shadow touches the deepest recesses of the heart while provoking, inspiring, and teaching in ways that characterize the best historical fiction.