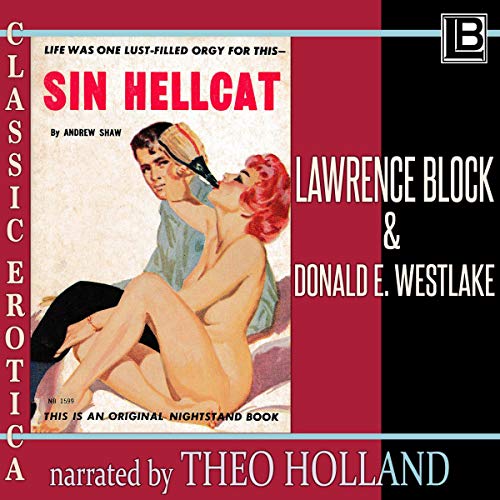 "As a huge fan of both Block and Westlake, I had fun reading this early collaboration by them before they made it big.... Is Sin Hellcat a lost masterpiece? No. But it’s way better than a 1961 sleaze paperback deserves to be. There’s enough titillation to keep the dudes flipping the pages, and enough edgy, adventurous content to add some substance to the work. Meanwhile, the writing style(s) is pretty excellent and genuinely funny and insightful at times. It’s not top-tier Block or Westlake, but it was a nice way to kill a few hours. Recommended." (Tom Simon, Paperback Warrior)

Don Westlake and I become friends in the summer of 1959, while we were living a few blocks away from each other in midtown Manhattan. I was at the Hotel Rio, on West 47th between Sixth and Seventh Avenues, and Don was a block south and several blocks west of me. Then I moved back to my parents' house in Buffalo, and Don and his wife and kid moved to Canarsie, and we wrote letters back and forth.

And at one point we decided it might be fun to do a novel together. Not by thinking it out and talking through it and, you know, collaborating in a serious artistic manner. Our method was simpler. One of us would write a chapter, and then the other would write a chapter to come after it, and back and forth, like that, until we had a book.

It worked, and by God it was fun. The first of our efforts was A Girl Called Honey, and it started when I wrote a chapter and sent it to Don. And so on, and we stopped when we had a book and sent it to Henry Morrison who sent it to Harry Shorten. We put both our names on the book, our pen names that is to say, and that's how Harry published it: by Sheldon Lord and Alan Marshall. And he included our dedication: "To Don Westlake and Larry Block, who introduced us."

It was so much fun that we did it again — in So Willing and again in Sin Hellcat. Damn, those were good days....