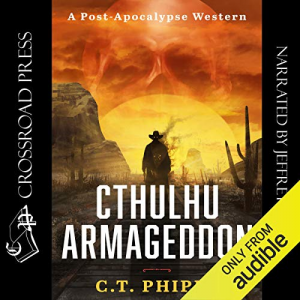 Cthulhu Armageddon is the story of a world 100 years past the rise of the Old Ones which has been reduced to a giant monster-filled desert and pockets of human survivors (along with Deep Ones, ghouls, and other "talking" monsters).

John Henry Booth is a ranger of one of the largest remaining city-states when he's exiled for his group's massacre and the suspicion that he's "tainted". Escaping with a doctor who killed her husband, John travels across the Earth's blasted alien ruins to seek the life of the man who killed his friends.

It's the one thing he has left.