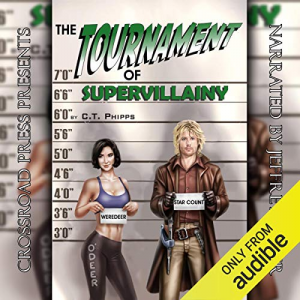 The Tournament of Supervillainy

Gary Karkofsky, aka Merciless the supervillain without mercy, is presently the most disliked supervillain in the world. Superheroes don't want to just throw him in jail, they want to deliver an epic beat down for ending their golden age by killing Merciful, the superhero with mercy. His fellow supervillains aren't much better, either jealous of his success or loathing him for all the other baddies he's killed. Also, what's up with his wife, Mandy? She's been acting extra strange since getting her soul back (long story). That's when Gary receives an invitation to the Primal Fighting Tournament - an interdimensional contest involving all the universe's greatest warriors. The prize? A wish with no limitations. Gary can finally get on that world domination thing he's been putting off.

Unfortunately, Gary is competing against good and evil way above his league. Not only Gabrielle Anders, aka Ultragoddess, his former fiancée, but Entropicus, the Space God of Evil. Thankfully, Gary has allies from unexpected sources including Jane Doe, the protagonist of I was a Teenage Weredeer, G from Agent G, and Cassius Mass from Lucifer's Star.