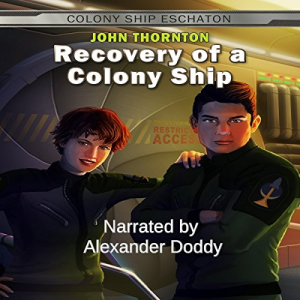 Recovery of a Colony Ship

This is the 1st book in the Colony Ship Eschaton series.

Michael and Jamie live in Dome 17. The last place safe for humans, or any life, on a dying Earth. They are adventurers who have explored other domes, but everywhere else is dead. Will Dome 17 meet the same fate?

The committee has a risky plan to try out unproven technologies: a faster than light scout ship, and teleportation. Both technologies have severe limits. Only two people can be carried aboard those FTL scout ships for a one way journey. Teleportation can only work when a receiving pad is at the target location. So can they make both these technologies work to save the last of humanity? A century before, the people of Earth had built gigantic colony ships with enclosed habitats. They were filled with flora and fauna and people. These ships were launched into space knowing it would take generations to reach other solar systems. Those space pioneers would live out their lives in transition to a new world. But the colony ship program was considered a dismal failure. All of the colony ships were considered lost.

Will Michael and Jamie travel to one of the colony ships? Will it be a derelict? Or will it be a chance for a new home for humanity? What will they find as they try the recovery of a colony ship?