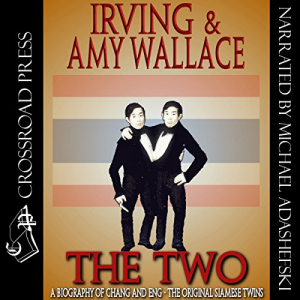 The Two: A Biography of the Original Siamese Twins

They came into the world as one - inseparably tied together at their chests - yet they were two. They were born on May 11, 1811, on a bamboo mat in a small houseboat afloat on the river in the village of Meklong, located 60 miles west of Bangkok, the capital of Siam. They became world celebrities, American citizens, married two native-born Southern sisters, and between them fathered 21 children, while acquiring respectable status as landowners, famers, slave owners, and pillars of their local community.

"They" were the famous, the first, the original Siamese Twins, Chang and Eng, and their story is told in this fascinating and remarkable book in such detail, with such enormous insight and warmth, and with such a superb sense of drama, that one understands, for the first time, just how bizarre, heroic, tragic, and human their lives in fact were.

Linked by Nature, Chang and Eng were fated to spend their lives joined by a thick, fleshy ligament resembling an arm, five to six inches long and eight inches in circumference, that connected them at the base of their chests. Yet they could swim, perform gymnastic feats and lead "normal" lives. Together they built their own house, opened a store, became wealthy gentlemen farmers, skilled horse breakers and, when necessary, defended themselves with their fists.

The most fascinating part of the story is, of course, their physical link to each other; for as Chang and Eng grew older, each dreamed of a separate life, despite the obvious risks that an operation would entail, and each feared that the death of one would cause the death of the other. Nor were their natures altogether harmonious, for each was a highly individual person: Eng, quiet, contemplative, and even-tempered; Chang, hot-tempered, quarrelsome and, as he grew older, inclined to bouts of heavy drinking. Chang's insistence on going to his own house in midwinter (the brothers arranged to alternate three days in one's house and three days in the other's) eventually led to exactly the death both had feared, for Eng died, perhaps out of fright and shock, an hour after Chang's life ended.

The Two is a biography of two remarkable lives, astonishing in its extraordinary descriptions of the brothers' triumph over their handicap and fascinating in its exploration of just how the Siamese Twins lived, spent their childhood, adjusted to fame, fought against being exploited by showmen, promoters and well-wishers, loved (and made love) and searched in vain for the surgical miracle that could separate them. It is a startling, original, and moving book.