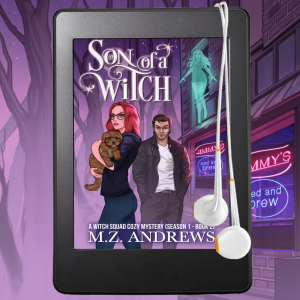 Son of a Witch

Mercy Habernackle has just gotten the surprise of a lifetime. She has a brother - and not just any brother, a dark, mysterious, and incredibly hot brother.

Given up for adoption 24 years ago, Reign Alexander just wants to get to know his long lost sister, but things take a dangerous turn when on his first night in Aspen Falls, a woman ends up dead, in Reign's bed!

Desperate to prove her brother's innocence and save her mother from heartache, Mercy enlists the help of the Witch Squad to find out who really killed Harper Bradshaw. But when Mercy discovers that her brother has been lying to her since he got to town, she must ask herself is her brother really as innocent as he begs her to believe?

When a second victim is discovered dead and Harper's sister, Elena, is held at gunpoint, Mercy must rely on her wits and her and the Witch Squad's paranormal abilities to put the puzzle pieces together and save the day.

Rejoin Mercy, Jax, Holly, Alba, and Sweets (and don't forget Houston and Sneaks) on another crazy adventure! New secrets will be revealed, and new friends are sure to be made!