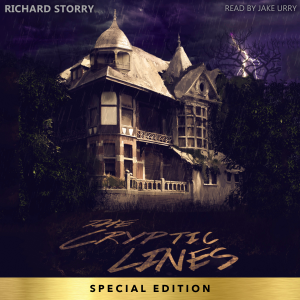 Set in a sprawling Gothic mansion in a remote coastal location, somewhere in the British Isles, the elderly recluse Lord Alfred Willoughby is deciding what is to become of his vast fortune after his death.

Whilst his head is telling him to leave nothing at all to his wastrel son, Matthew, his heart is speaking differently.

After much deliberation, in a last-ditch attempt to try and show to his son the importance of applying himself to a task and staying with it to the end, he devises a series of enigmatic puzzles cunningly concealed within the lines of a poem - the cryptic lines.

If he completes the task successfully and solves the puzzles, he will inherit the entire estate, but if he fails, he will receive nothing.

However, from Lord Alfred's will, it emerges that Matthew is not the only interested party. The mysterious old house holds many secrets, and nothing is as it first appears....

The audio version, read by Jake Urry, has now been re-recorded at an even higher quality, bringing this atmospheric tale to vivid life like never before!