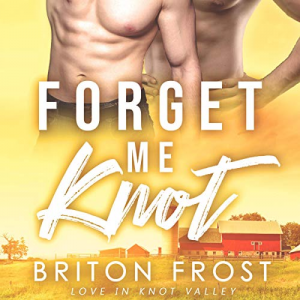 After serving five years of a 10-year sentence for a crime he didn't commit, coming home to Knot Valley after being vindicated should be alpha Luke Barker's triumph. All he wants is the life he was supposed to have - a thriving farm, a strong family, and a house full of kids. He should have learned by now that nothing is fair, and he'll have to work just as hard to make it on the outside as he did to survive in prison.

The fields are fallow, his house is falling down around his nearly catatonic father, and his ex-boyfriend is somebody else's husband now. But he's not giving up. He'll replant the crops, fix the house, and find an omega of his own. Not in that order, because a man has needs, and his have been denied too long.

Michael, the quirky omega waiter at the diner downtown, could use someone looking out for him, and Luke needs a favor in return. Starting with a baby. This farmer is about to take a husband.

Welcome to Knot Valley, a sleepy small town in Eastern Washington. Forget me Knot is the first in the series about super dominant alphas and quirky omegas finding love and creating families in an alternate universe where mpreg is possible. Some of the books are reimagined from a different series. If you like your MM steamy and endings happy, this hot series will get you right in the feels.