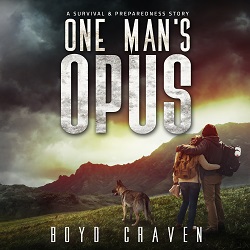 Rick is like many Americans. He’s concerned with what he sees on the news, and how the country seems to be ready to tear itself apart. His biggest concern has been civil unrest. Already an avid camper, he sets out to secure his future, and career, by finding his own Eden.

Tina is a small business owner and knows what she wants in life. She and her furry companion find themselves at gunpoint when Rick walks back into her world and forever changes the dynamic between them.

One dog, who’s been the savior, protector, and companion… Opus. The owner of two humans that mostly understand him. Mostly.

When the police walk into an ambush, a series of events forces the couple to bug out. The problem with having to leave for a small town, at a remote location, is it really isn’t a secret. Small towns bring their own problems with crime, and power plays. Everybody knows everybody, and the gossip mill runs as fast as lightning.