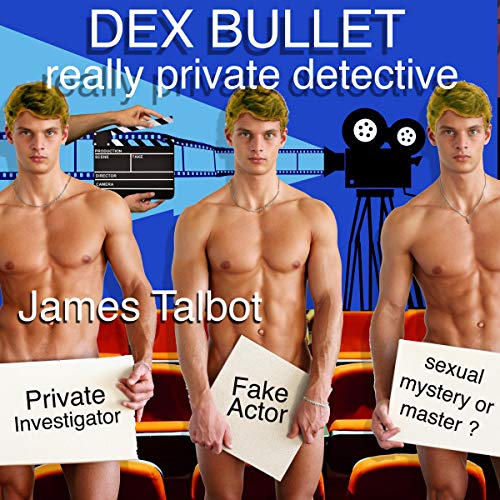 Dex Baxter, really private eye, is willing to anything to solve his case and find his man... anything!

It's Hollywood in the 1960s and young, very handsome private investigator Dex Bullet is very excited to have his first rear, I mean, first real case! He’s on the trail of actor Mark Trent who vanished while filming a role in a major movie. He soon learns an actor's body is his tool box, and in his assumed role as aspiring actor Cliff Baxter, Dex learns to use equipment from top to bottom in his pursuit of solving the mysterious case.

Dex manages to take over his movie part by giving his all in sensational audition for powerful movie producer Marlin Masters and satisfying his lusty demands in every way. As the gorgeous PI seeks clues at the movie studio, Dex discovers his gorgeous body and naive charms are in demand by many men working on the film. They are all eager to help his beautifully budding talent! Dex happily gives grateful thanks for guidance as an actor, and for clues to missing Mark.

Young Dexter discovers the bizarre world of making movies as well as a strange new wonderland of sexual sensations that his luscious body has never know before. In his pursuit of solving the mysterious case, Dex discovers another mystery in the process, a personal one, unlocking his own sensuality and fantasies.