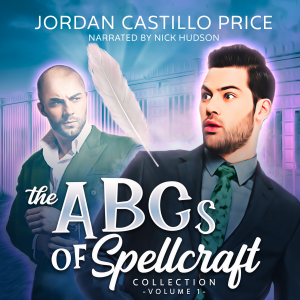 The ABCs of Spellcraft Collection Vol. 1

Dixon Penn’s family wasn’t terribly shocked when he announced he was gay, but they were devastated to learn he’s the only one without the gift of spellcraft. Fortunately, that doesn’t stop spellcraft from reaching out to him.

Dixon’s prospects have gone from bad to worse, but a contest at the biggest greeting card company in the tri-state area would be just the thing to turn his luck around. So what if he’s not technically a Spellcrafter - he’s been scribing pretty words and phrases all his life. How could anyone possibly write a better verse than him?

Yuri Volnikov, the taciturn Russian security guard at Precious Greetings, is determined to keep the charming contestant out. But Dixon has always been a sucker for big guys with exotic accents, and he won’t take no for an answer.

Whether or not Dixon wins the prize he hopes for, when he and Yuri work their magic together, it’s clear that luck is on their side.

The ABCs of Spellcraft is a series filled with bad jokes and good magic, where M/M romance meets paranormal cozy. A perky hero, a brooding love interest, and delightfully twisty-turny stories that never end up quite where you’d expect.

This collection contains the first four stories in The ABCs of Spellcraft series: Quill Me Now, Trouble in Taco Town, Something Stinks at the Spa, and Dead Man's Quill, plus the bonus short All that Glitters.